These Are The Top New York Cannabis Companies

New York State Governor Andrew Cuomo announced his plan to legalize adult use cannabis in 100 days. The governor did not provide a lot of details but suggested it would continue to be a restrictive program.

Of course, New Jersey also said it would legalize adult use cannabis but then found it has taken much longer to make adjustments to the rules and regulations of a conservative medical cannabis program. Cuomo did note that consumers would need to be over the age of 21 and he was very supportive of towns cities having the ability to opt out of allowing cannabis businesses.

In December the Governor said, “The fact is we have had two criminal justice systems: one for the wealthy and the well-off, and one for everyone else. He also said that law enforcement “for too long targeted the African-American and minority communities.”

On May 15, 2018, New York City Comptroller Scott Stringer published a report estimating the potential size of the state’s legal cannabis market and how much tax revenue it would generate for both the city and the state. According to the report, the New York State cannabis market could see up to $3.1 billion in annual sales, with up to $1.1 billion being generated in New York City alone. In terms of tax revenue, legal cannabis could generate up to $436 million for New York state and $336 for New York City. Some lawmakers have even suggested this money could be used to fix the troubled subway system.

A new report from ArcView and BDS Analytics is estimating the New York cannabis market could reach $1.6 billion by the year 2022, a big jump from the expected $263 million in sales for 2018. This would be the fourth biggest market in the U.S. The biggest market is California, followed by Colorado and Florida respectively.

“Let’s legalize the adult use of recreational marijuana once and for all,” he added.

During the midterm elections, the New York State government shifted to Democratic control and it was expected that the new lawmakers would fully legalize cannabis. The efforts by Cuomo as expected to be approved in Albany. The tax revenue and jobs from fully legal cannabis would be a big boost to some of the needy areas in the state.

Just this week, Canopy Growth (NYSE: CGC) said it was going to spend $150 million to build its first production facility in the U.S. after getting a license to grow hemp by New York.

Canopy Growth Corp. will spend as much as $150 million to build its first production facility in the U.S. after the Canadian cannabis company was granted a hemp license by New York state. “I applaud the political leadership at the federal and state level that has allowed today’s announcement to become reality,” Canopy Chief Executive Officer Bruce Linton said in a statement.

The company said it was reviewing locations in the Southern Tier region of New York State and said it would announce the winner within 100 days.

Cuomo is under pressure to create jobs in depressed areas in upstate New York and cannabis jobs fit the bill. A study, published by Joblift, shows that cannabis growth in California is “steadily declining,” while New York State is experiencing strong growth. New York is now third in terms of gross domestic product and is experiencing a “surge in medical marijuana job postings,” with the study saying it could hold “the most potential for overall growth in the sector.” New York experienced two times more job postings (155 vs. 67) in the first half of 2018, compared to the prior year.

Next comes the question investors want to know. Who is poised to capitalize on the New York market? Cannabiz Media is a company that tracks license holders in states around the country. 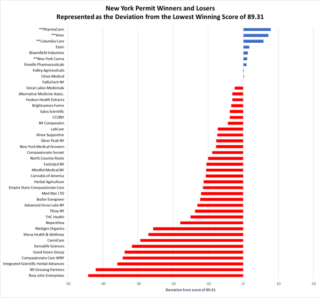 Vireo Health is next on the list. Vireo  is  a physician-led multi-state medical cannabis company, that says “It is committed to safely alleviating pain by providing patients with best-in-class cannabis products and compassionate care.” Unfortunately for investors, this company is still private. Although it did raise $17 million back in August and the company said that it was planning on going public at some point.

Vireo is still making headlines as formers executives were set to go to trial at some point this year for smuggling cannabis oil from Minnesota to New York. The company was trying to move inventory to meet a New York deadline and the move was exposed due to a whistleblower.

Next in line for number of permits is Columbia Care, which is expected to go public in the first quarter of 2019 following a merger with Canaccord Genuity Growth (CGGC), a special purpose vehicle.  In October it was announced that the two companies would combine. The companies agreed that CGGC would be valued at C$60.7 million and that Columbia Care would be valued at US$1.35 billion. The deal is expected to close in the first quarter of 2019.

Columbia was selected to be one of five licensees in Virginia and became the first U.S. company licensed in the European Union. It was recently awarded one of the six new licenses in New Jersey.

Etain Health is one of the original five licensees in New York and it too remains a private company. It is female-owned only recently began to expand beyond the state lines as it looks to California as another market for its products.

Acreage Holdings, Inc. (CSE: ACRG.U) (OTC: ACRZF) also stands to benefit due to its ownership of New York Canna, now known as Terradiol New York. New York Canna was originally formed  in 2015. The initial shareholders of New York Canna, Inc. were intended to be New Amsterdam Distributors (NAD) and EPMMNY. However, NAD and EPMMNY were unable to reach an agreement as to EPMMNY’s contributions to the operating entity and the terms of investment. NAD says it was the sole shareholder of New York Canna when it began talking to Acreage among others.

EPMMNY doesn’t agree with this assessment and recently filed a lawsuit asking for $400 million. EPMMNY says in its lawsuit that it was “frozen out” in 2016 and its stake reduced initially to 12.5% as NYCANNA merged with defendant NY Medicinal Research & Caring, which included NYCI Holdings, Impire Holdings and Acreage Holdings as investors.

Firorello Pharmaceuticals also known as FP Wellness is a New York State only licensee. It is privately owned. The company lists its partners as The Clinic, Plant Consulting Group and LIU Pharmacy on its website. A report in the Daily Gazette said that Fiorello is building a medical marijuana production facility in Glenville and plans to open other dispensaries in Monroe, Nassau and New York counties.

Valley Agriceuticals was supposed to be sold to iAnthus Capital Holdings Inc. (CSE: IAN) (OTC: ITHUF) in 2017  for $17.3 million, but that deal was never closed. iAnthus then acquired New York’s Citiva Medical for $18 million at the beginning of 2018. According to the original press release, Citiva NY’s license included a cultivation and processing facility and four dispensary locations to be located in Brooklyn, Staten Island, Dutchess County and Chemung County. Citiva’s proposed 2,000 square-foot flagship Brooklyn dispensary was slated to open in Q4 2018, and would be one of only two dispensaries located in New York City’s most populous borough, with 2.6 million residents.

The statement said that Citiva’s Staten Island dispensary, would be the only Registered Organization serving Staten Island’s 500,000 residents and it was also slated to open in Q4 2018. The Dutchess County and Chemung County dispensaries are planned for the second quarter of 2019.

Finally, Palliatech, which changed its name to Curaleaf Holdings Inc. (CSE: CURA) (OTC: CURLF) is based in Boston MA. It has locations in seven New York counties. Its website says more counties are coming. Near Manhattan there is a dispensary in Forest Hills in Queens. In the company’s last earnings announcement, it said that it estimates it will post revenue of $400 million in 2019 including revenue generated by the non-profits, and free cash flow of $100 million. Curaleaf expects to complete two acquisitions in the fourth quarter of 2018 in Maryland and Massachusetts. At the end of 2018, Curaleaf also expects to have at least 40 operational stores.